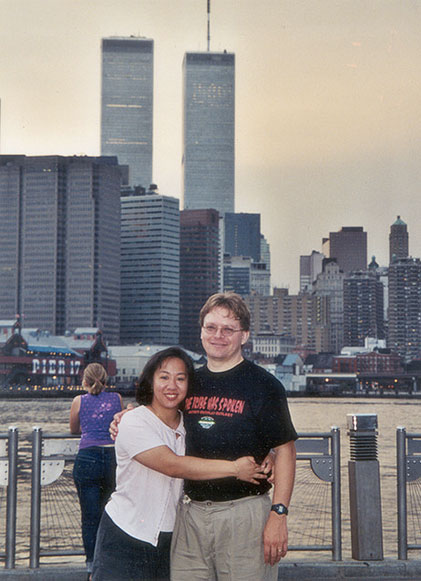 This picture was taken roughly one year before 911. It was my second trip to New York City where my wife was from. Both the Empire State Building and the World Trade Center were something I wanted to see all my life. I remember standing at the foot of the towers and looking up trying to take in their size. Curiously, my wife and I visited the site of the Triangle Shirtwaist Factory Fire not terribly far from the WTC and I remember thinking of the enormity of that tragedy because people were forced to jump from the top floor of the burning building. We also saw the Citicorp Center in which a graduate student found a structural flaw that – without retrofitting – could have resulted in the building actually collapsing. I remember asking if anyone could imagine a building in New York City actually collapsing – inconceivable, I thought. Obviously, I never could have imaged what would happen at the World Trade Center, the tallest two buildings in New York, just a year later.