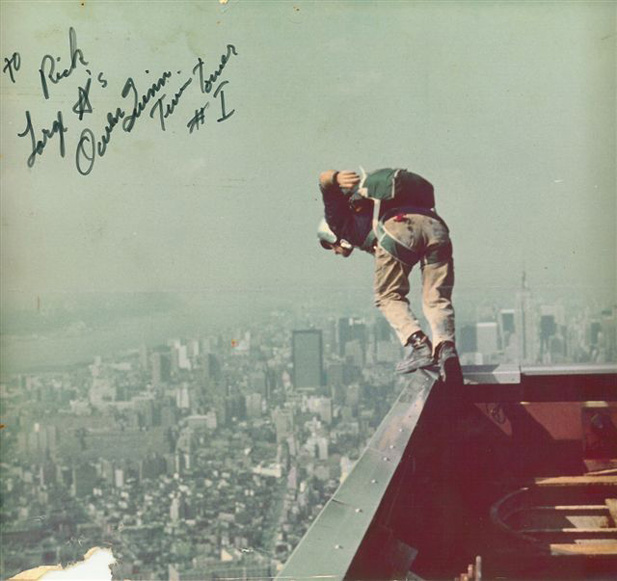 The picture was given to me by a skydiving student of mine who I taught to jump. He was given the picture by the man who took it. … Many years ago, maybe 25 or so, I worked as a commercial pilot. I had a flight from southern New Jersey to Boston one morning to pick up passengers. I was alone in the plane flying over NYC at about 10,000 feet just at sunrise. The entire city and the surrounding area was covered with clouds. I couldn’t see any land anywhere. Only the twins tower of the WTC were visible sticking up through the clouds. Neither the Empire State Building nor Rockefeller Plaza could be seen, only the twin towers. Both towers were bathed in deep golden light from the rising sun; they were glowing. It was breath taking. One of the most beautiful sights I have ever seen. And I didn’t have my camera with me. After 9-11 the image of those two buildings bathed in the deep gold of the rising sun has been a wonderful and lasting memory for me. I get quite emotional when I re-tell the story. The two golden towers sticking up through the white puffy clouds all alone were wonderful to see.
In some odd way, my memory of those towers bathed in golden sun light is also a memory of our country that will never be again: 9-11 changed it all.“ Bernie Sayers

MY_WTC had a chance to talk to Owen Quinn – here you find an excerpt of the telephone conversation on March 17, 2011

MY_WTC: In 1975 you jumped from the (back then) 2nd tallest building of the world. What are your feelings when you think about it today, 36 years later?

Owen Quinn: Sometimes when I think about it I kind of ask myself …like… did you really do that? Something like that I ask myself: did I really do that? I would think by doing that, the best thing that happened for me was the beautiful people I have met from all over the world like yourself.

Owen Quinn: Yes – people call me, people write me letters and people ask me questions and I love answering them and I love explaining to people about the jump and how it went and why I did it and things of that nature. So meeting the people that are interested in the jump. For me that is the best part of the whole jump!

MY_WTC: Would you say that the jump changed your life in some ways?

Owen Quinn: As far as my own personal life – my personal life just went on as normal as it would have. I went through a lot of the celebrity status, you know, and doing television shows and newspapers and articles and magazines. That was a – let me put it this way – that is kind of like an ego trip I was on. I did not want intentionally to be that but I maybe feel like: wow! People are really interested in what I did. In the skydiving community, you know, when I go to different quarters now people say: „oh that’s the guy, that’s the guy!“

MY_WTC: Why did you chose the World Trade Center?

Owen Quinn: The reason I chose the world trade center was I helped build those buldings. and there were no obstructions on the bulding that would interfear with the jump.

MY_WTC: I am not into parachuting at all. I live on the 4th floor and I get always dizzy when I look out of my window. The picture I have in front of me right now where you are just about to jump over the edge of the building – for me it is unbelievable and very fascinating. There is so much courage required and I cannot imagine how a man can do that.

Owen Quinn: As far as courage, I mean, I was scared. I was definitely scared but, you know, in making that jump I knew without a doubt that that parachute was going to open. My expertise told me that it was going to be a safe jump. A lot of people don`t know this, but the type of chute I have jumped with, in order to open it when I go off the building, I had to fall about 60 floors before I opened it. So the wind would pull it off my back. If I had tried to open it right away, it would not have opened because it’s so air resistant. I knew, I calculated that I would have to fall approximately 60 to 70 stories before I pull. There was a building across the street that was almost half as high as the World Trade Center. And I used that building as a mark. I knew when I was falling, when I was even with that building that I should pull. And everything worked out just the way I have planned it.

MY_WTC: Great! Owen, I was reading an article in the Sports Illustrated, it’s a wonderful and in depth article. They wrote that when you jumped you kind of crashed you into the facade.

Owen Quinn: Yes, I did and the chute opened! The chute kind of turned into the building and all I did was I kicked off with my feet and there was no danger to me, nor the parachute. The interesting part was that people of the upper floors reported a suicide when they saw a body go pass the window. They didn´t know I had a parachute on. The people on the lower floors, when the chute opened, saw a guy out here with a parachute. So by the time I landed, which is only a matter of maybe 10, 12 seconds, I could see the people coming out of the building. The authorities, the police and they were all looking on the ground for the body and I came in right over the top of them and landed right in front of them.

MY_WTC: Amazing. Would you do this jump again?

MY_WTC: Today the buildings are getting taller and taller. In Dubai there is the „Burdsch Chalifa“ – Tower, 2.716 feet high. Is it worth a jump?

Owen Quinn: Oh absolutely. But you must remember something: with the newest chutes they have today, you could jump off a 20 story building and it would open immediately. With the chute I was jumping with you had to have some speed to get the chute off your back. The new nylon chutes open immediately. Whereas I felt for 60 floors I needed to do that to get the chute to open. And today you could slip off a building and fall 5 floors and the chute would be open. That’s because of the new technology.

MY_WTC: Owen, thank you very much for the interview.