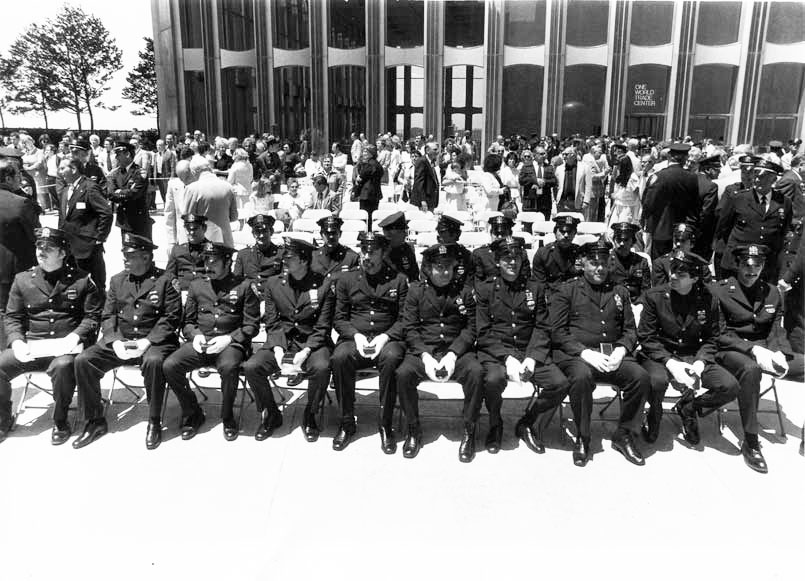 The complex of the WTC if it was laid out flat would be as big as a small City. The complex had its own Police Force manned by the Port of New York and New Jersey Police department. I was a Port Authority Police Officer and detective from 1971 until I retired with a NY State Police pension in 1991.

I was present at the WTC on opening day once Tower two was completed in 1973. The photos are both from the official opening day. The large group photo was a group of Police Officers that were present to receive their respective awards, both Police meritorious and commendation medals for police heroism and actions displayed in the line of duty.

I was a police officer for 3 years in uniform when promoted to Detective for my remaining 17 years. I watched the World Trade Center rise, and on 9/11/01, I watched them fall. Many of our retirees voluntarily retuned to semi-active duty after the initial attacks, assisting the PAPD in many aspects of normal police functions.

I was assigned to the WTC Police district once in my Career, as a detective, and have many fond memories of the people that I worked with. On any given day, many thousands of patrons and citizens, worked, traveled to and from work and shopped at the complex, while other, many of whom were tourists, came to the complex just to visit the site. Police functions were numerous, just as is in a small City. The complex had thousands of tenants, cafes, bars and restaurants and retail stores.

Thefts were very common in the form of “pick pockets”, retail store “shoplifters”, and yes, even bank robberies as there were many banks and financial institutions in the complex. As a detective, there was never a “dull moment”. To see the demise of the towers, actually affected many of the active and retired PAPD members in many ways. This is one of the reasons that I was the founder of the Port Authority Police Retired Detectives Association (NYNJ PARDA).

Our PARDA by-laws allow our members to volunteer their services at any time without any due compensation, to the Port Authority and Port Authority Police department, in any future catastrophic events that may be forthcoming. In closing, we are a band of brothers and sisters that will remain together for all eternity. We all have experienced an attack on our homeland and on America’s shores, which will forever remain a part of history.

The loss of our “37” brothers and sisters, will never be forgotten, we will keep their memory alive. No other police department in the world to the best of my knowledge, has ever lost so many of our brothers and sisters in one catastrophic event such as the blatant cowardly attack on innocent people, many from all corners of the world, in just one day. www.signal8-2.com