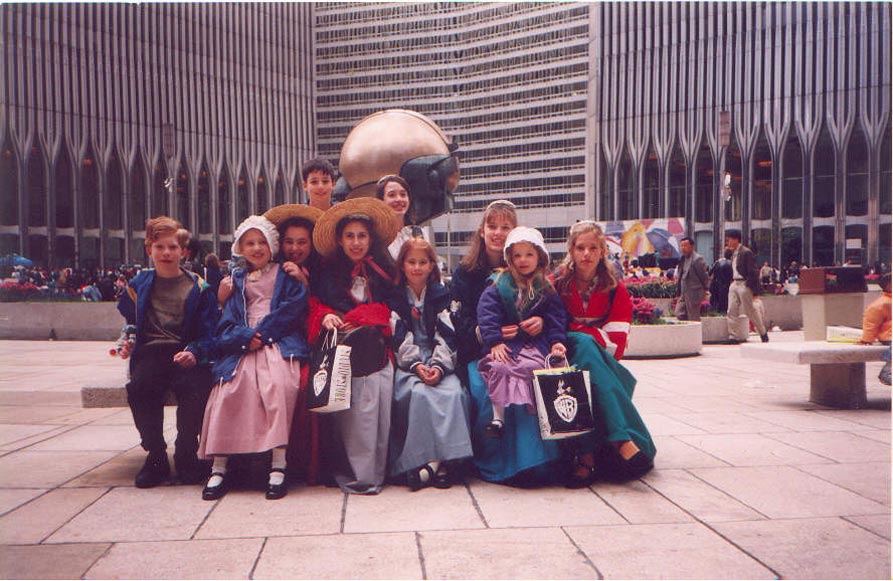 The photo was from May 1997. „Little Lost Arts“ originated as a performing and cultural arts center for youth that focused on the „forgotten“ or „lost“ arts of the past, including ritual theater, historic dance, puppetry, etc. Consequently, we did a lot of work with living history museums – so when PBS-TV (the Public Broadcasting network that launched „Sesame Street“) sponsored „Children’s Day at The World Trade Center“, we were invited to participate, performing various dances from Colonial America, and historic sword dances, in costume.

It was a perfectly clear, sunny day when we carpooled about 25 children into the city from rural New Jersey. The kids changed into their costumes inside the WTC’s restrooms, and upon entering the plaza, were immediately greeted by colorful pennants, strolling performers, some celebrities, and a series of large outdoor stages, each hosting a different type of performance. Throngs of parents pushed strollers, as children skipped from station to station, juggling candy, ice cream and balloons. And every stationary bench (sculpture and fountain) became an inviting „jungle gym“ for kids to climb upon. It was an amazing day that will always be remembered – for in the middle of all the chaos that is so often New York City, the World Trade Center had become a carefree and peaceful oasis – if only for a day.

Good luck and much success with your creative and very endearing venture – I’m sure it will be treasured by many for years to come! Little Lost Arts