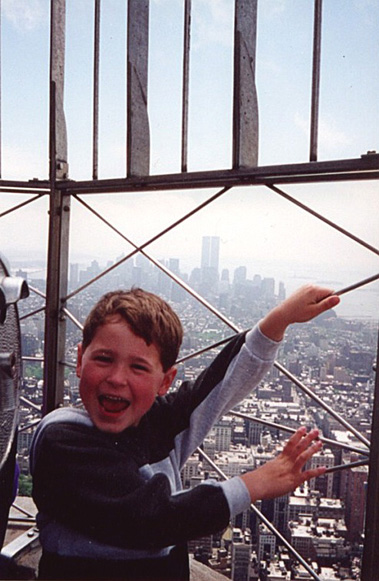 This is a picture of my Son William. He was born in 1995 and we went to New York City for a day in 1999 or 2000. We were living in Heltersberg, Germany, Rhineland-Pfalz at the time as I was working with the United States Air Force in Kaiserslautern, Germany.

Actually I am from a small town called Freeehold, New Jersey, where my parents lived. It is about 40 kilometer’s outside of New York City, so our trip to the city was a trip home that summer to his grandparents. When we went to the city that day we didn’t have time to go up in the twin WTC towers. During this visit we only drove our car the World Trade Towers to show William how big they were. It was a full day which did not permit us time to go to the WTC observation deck. The picture you see here of him was taken a top the Empire State Building. I thought that it would be a nice to have the twins in the foreground.

I’m glad that I took it now. I had several relatives that know of someone who worked in the Towers because I grew up so close to them. They were iconic to me as a symbol of the city, not the nation. The year that the towers fell I was leaving the military but this event delayed that event. I would say that nothing was accomplished by their destruction other then a heartless event with sub-sequential many many tragic losses of human lives. Here are some pictures from our trip to the city that day. You can enjoy them and share with all if you like.