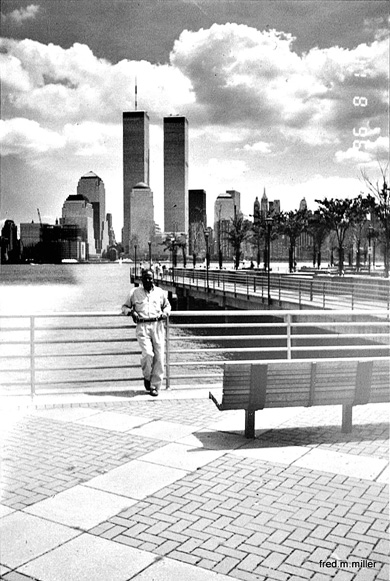 Thousands of miles away, driving home after working the Graveyard Shift as Night Auditor at the Homewood Suites Hilton in Clear Lake Texas. I reached my front door and was about to turn the key when my next door neighbor told me in his most sober voice, „They done rammed a plane into that big office building in New York“ in his normal Texas Slanguage. I staggered in already tired, turned on the TV and left it on till I went back to work that night at 10:30 pm. Only overnight work fatigue drove me to shut my bleary eyes that fateful day.

One of the last things I did before leaving the NY/NJ area 5 years earlier was to drive a Limo to the front doors of Building No.1 of the World Trade Center. The VIPs that I drove to and from the Twin Towers often arrived by Private Jet around 7:30 am and by 8 am we were at their usually scheduled meeting inside the WTC. They remained inside till early afternoon and I then drove them to their hotels or sometimes back to their Private Jet or Helicopter. In the interim between 7 am and 4 pm I ate breakfast, drank lots of Coffee, smoked lots of cigarettes and strolled around the area, often shooting the breeze with the numerous other Livery drivers parked all around and under the area of the WTC. Our clients were Stockbrokers and CEOs at all the major financial institutions like Chase Manhattan, Merrill Lynch, Bank of America etc., and they paid handsomely to keep us booked all day when all we did was barely an hour’s worth of actual driving for them.

The pic above was not a B/W shot originally. I decided to present it that way to convey how it contrasts with the original (MY_WTC #265)…. the ‚extra‘ bonus one you get at the end of the roll inside disposable cameras. That last one you try to squeeze out, color bleeding and appearing to be double-exposed.

Blood-red stains that permanently blot my last memory of the place I loved. I often wonder at my luck in leaving that NYC work situation when I did….8 a.m….I could have been buried in the rubble along with countless other Limo Drivers and their Lincoln Town Cars. There is no way to tell if I would have become a statistic along with those who perished that tragic day.

So, where was I on 9-11 ? Physically, thousands of miles away in Seabrook, Texas. Mentally however, under that rubble, knowing that day would last forever. virtualpoona.blogspot.com