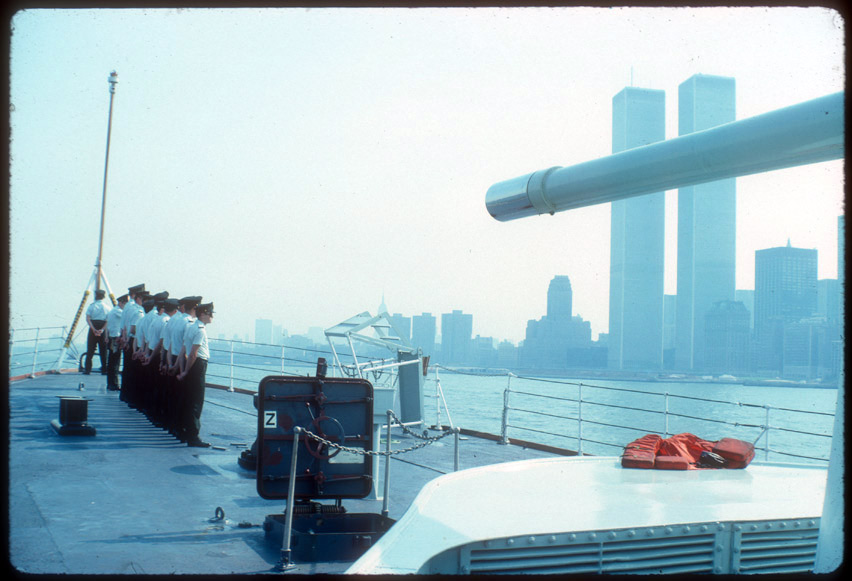 World Trade Center Towers in sunlight: The forecastle party of the Canadian destroyer, HMCS Iroquois, look at the Manhattan skyline, with the backlit World Trade Center towers in the right background, July 3, 1976. The Iroquois joined nearly 200 other warships that anchored in the Hudson River July 3 – 4, 1976, in observance of the US Bicentennial. The miles-long column of warships was joined by tall ships from around the world that sailed up the Hudson River, past all the anchored ships and back out to sea again.

Following is my story about seeing the World Trade Center towers for the first time, in fog, on July 3, 1976, and the sights of 9/11:

Seeing Lower Manhattan shrouded in fog is nothing new for New Yorkers in the summer. But for one young Canadian sailor, the sight of the then-new World Trade Center towers emerging from the mists on July 3, 1976, was a sight he would not forget – 25 years and three months later – on September 11, 2001.

“I was serving in HMCS Iroquois and was taking pictures in support of Canadian participation in the US bicentennial naval review of July 4, 1976,” said Petty Officer Peter Magwood, of Ottawa and Dartmouth, NS. “As we entered New York City harbor and past the Statue of Liberty, all of Lower Manhattan was blanketed in fog, except for the World Trade Center towers, which poked up through.

“I thought I should photograph them but decided not to, preferring to wait a bit until we had gone further upriver and in hopes that the sun would come out.”

The sun did emerge, the fog was burned off and Iroquois and nearly 200 other warships anchored in the Hudson River for the naval review. Many more photographs were taken that day and the foggy approach to Lower Manhattan was forgotten; that is, until the morning of September 11, 2001, when television cameras showed PO2 Magwood the same images he had seen a little over 25 years before.

“It was not fog but dust, debris, death and destruction that surrounded the two towers,” he said. “I could not believe I was seeing this cataclysm and I was struck by the awful similarity between what I saw on 9/11 and the weather on July 3, 1976.