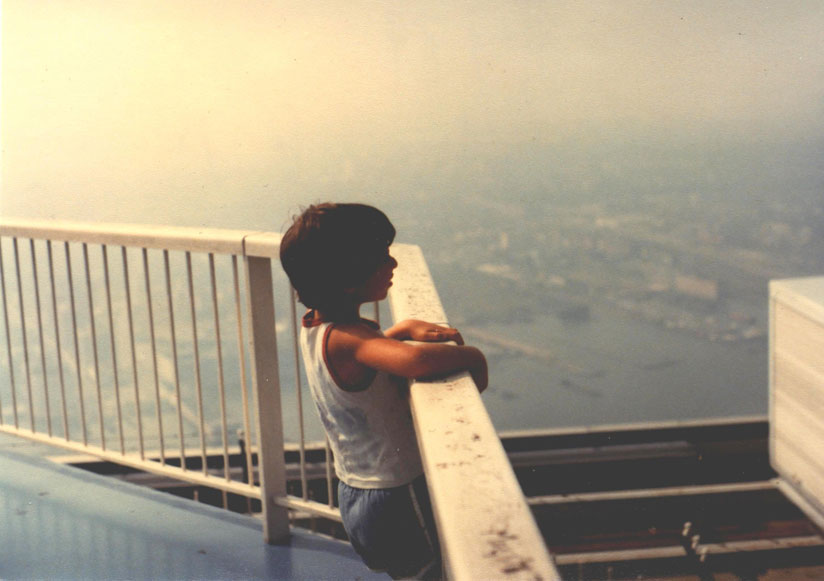 I’ve taken a look at your blog, and I’m happy to let you use my photo. I only have one; it is of me at the top of the WTC when I was 6 years old.

The twin towers were always an implicit source of New York City pride to me. I’d never thought about them explicitly that way, but when they were destroyed I realized just how symbolic they were to me, without my ever thinking it consciously. My mother worked 2 blocks away from the WTC for 25 years and visited it all the time; she loved the towers as much as anyone could. She emigrated to the U.S. right around the time they went up, so I imagine they represented her new homeland to her in a way that I can hardly understand. In fact, when I learned that the towers were initially hated by New Yorkers at the time they were erected (I learned this only long after the towers were destroyed), I was genuinely surprised; I had never heard a bad word about them in my life.

You used to be able to pretty freely take the elevator right up to the top. Bear in mind, this is coming from the memory of a young boy–but I believe the observation deck used to be wide open, with just a waist-high fence. When I was maybe 11 or 12, my friend and I would take the elevators to nearly the top, get out, and wander around the back corridors of Windows on the World (or whatever offices were up there near the top). I remember finding some large floor-to-ceiling windows in private back hallways that had amazing views.