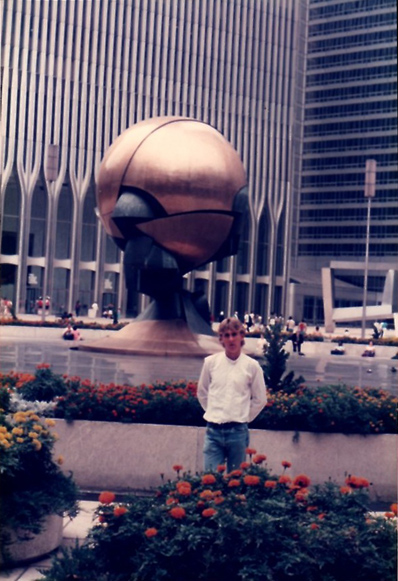 My arrival in New York City that August was the apex of a summer-long, Kerouac-inspired road trip I took with an Irish poet friend of mine from Los Angeles across the west, through the south and then up the eastern seaboard, arriving in New York to find it as crazy beautiful as we had imagined.

It was a wonderful time to trip about the city.

Times Square was still in the throes of it is majestic decay, long before its corporate Disney makeover, and the gritty underbelly where both Joe Buck and Travis Bickle had stumbled along was still bathed in the neon invitations from 24-hour peep-shows, book stores and adult theaters, shady hucksters shouting about paradise found and strange women lurking in the shadowed doorways.

The city was filled with legendary buildings, a sad rarity in Los Angeles, and we spent days just getting lost in the city, from Harlem to Greenwich Village.

But it was in Lower Manhattan where the Trade Center loomed, towering like a different sort of beacon, or maybe just another side of American success and its accompanying excess, that we were drawn to one afternoon to get a better view of it all. I remember walking around the plaza that day in a collarless Spanish wedding shirt, it wasn’t too muggy and it seemed as if a summer storm was rolling in off the Atlantic. As we made our way up to the observation deck on the South Tower to peer across the steepled, concrete canyons of Gotham, we were quietly amazed at the sheer scope of the city and everything it represented.

John Lennon was right; New York City was modern Rome, and we stood atop its latticed pinnacle certain of great days to come in our lives.

And I suppose that’s what the Trade Center towers represented to me as my life went on: a swift ride to a rooftop of dreams where I was allowed a glimpse of the possibilities and opportunities that were out ‚there‘ just waiting for me—and at 20-years-old from the roof of that tower, they seemed as endless as all the windows in the buildings below.

That summer adventure continued on and carried us to other great cities still; Boston, Montreal and Chicago, but Manhattan was definitely the high point, both figuratively and, as it turned out, quite literally.

I would return to New York many times after, including studying at the State University of New York at Stony Brook, but there’s nothing quite like your first time.