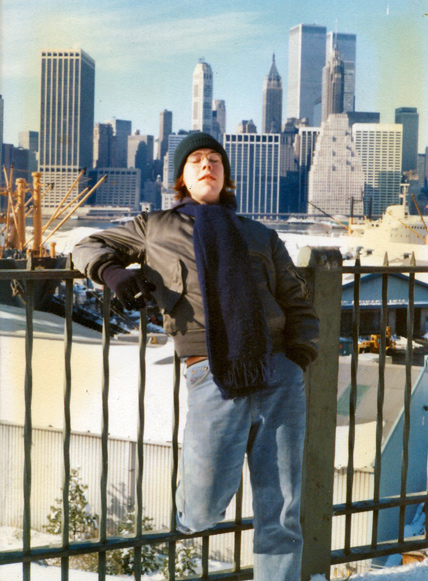 This is a photo of me on the Brooklyn Promenade in 1978. I lived in NYC from 1977-1982, and the Word Trade Center was always one of my icons. I probably only went up the Empire State building once or twice. But whenever a friend came to town, we would always take them up the WTC. I went to the top dozens of times. I loved the whiteness of the buildings and the expanse of the plaza. I loved the enormous Joan Miro tapestry hung in the lobby of one of the towers (I wonder if it survived/was recovered?).

One of my favorite memories is of attending the Avant Garde fair there, in 78 or 79, I think. John Lennon and Yoko Ono hired a plane to sky-write inspirational messages over the plaza. There is a building in downtown Seattle that was designed by the same architect, and it is a virtual twin of the towers. It is haunting every time I see it.