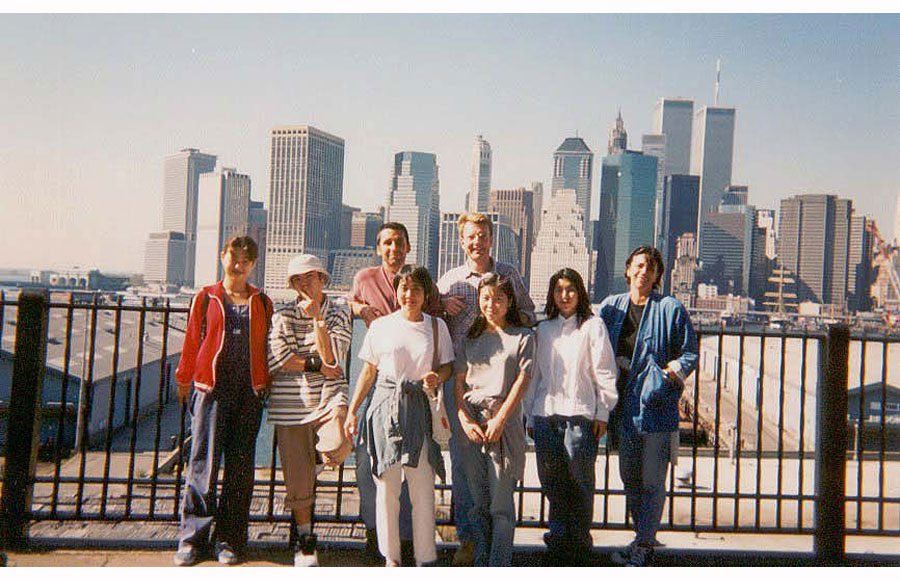 I lived in Brooklyn Heights, NY from 1994-1997. I teach English as a Second Language to adults. This photo was taken during my first year as a teacher for a proprietary school in Manhattan. The Intensive English classes were for students visiting NYC — from 2 weeks to several months. Monday through Thursday we studied, but every Friday we took a trip to some location in the city. I wanted my students to see the best of the city and to help them navigate beyond Midtown Manhattan. On this day we took the subway to Brooklyn and walked to the Brooklyn Promenade. Later we walked back to the city, over the Brooklyn Bridge, through Chinatown and Soho. We took this photo because it was a great souvenir — everyone in the world knew the WTC buildings: they were New York City. What my students didn’t know: I saw this view everyday from my apartment windows.

In 1994, I moved into my cousin’s apartment, which was low-income housing — the only way I could afford to live in NYC. The apartment building was next to the Brooklyn Bridge and directly across the river from Lower Manhattan. Up on the 17th floor, I had a million dollar view of the World Trade Center and lower Manhattan. I watched the towers in the morning, as the sun rose and glinted off the windows. I watched them disappear into the fog on rainy and snowy days. I stared at the many windows, lit up at night by office workers and the cleaning crews and thought how small I was in such a big city. At some point I even stopped noticing the buildings; they were always there, they would always be there. I arrived late at night on my first visit to my former home after 9/11. I went into my old bedroom and opened the blinds on the window. I sat on the bed and I stared at the gap in the skyline. Tears rolled down my face. I had taken the permanence of the WTC for granted, as well as the safety I felt as an American. Nothing would ever be the same.