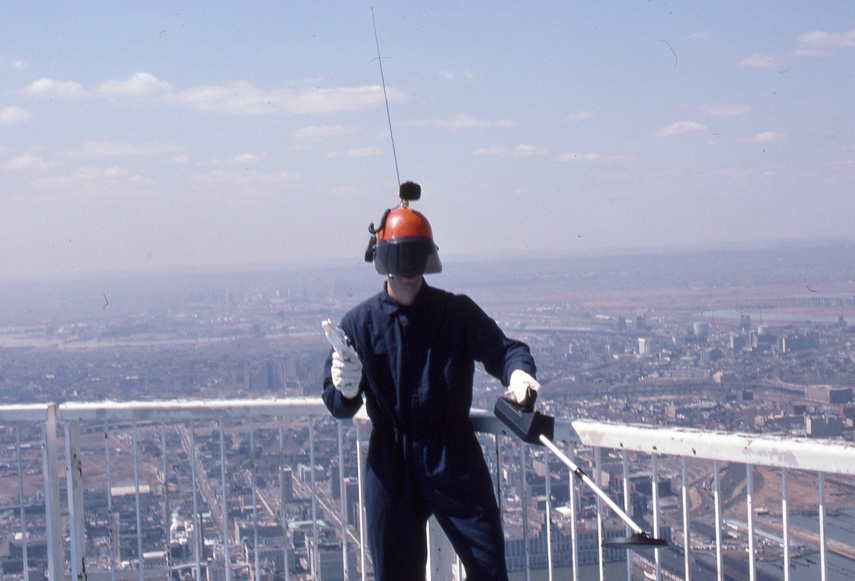 That photo was for a video shoot for M-M-M- Manhattan a single I released in 1984 using backbeats and the sounds of the manhattan soundscape, I also did another work called Manhattan Frequency that used the the oscillation of the Manhattan skyscrapers like tuning forks.The image you see is a percussion setup with a metal detector that plays the world trade center like an instrument. we also did a windharp at art on the beach called wind antenna

I loved the world trade center, really, really loved it like an old girlfriend. It was so beautiful and elegent. The seeds for this affection were planted by being born in Minneapolis that had a similar building by Minuro Yamasaki, So I grew up relating to the architects ideas on a smaller scale. I moved here with my wife Mary in 1977, Every weekend I was in town I’d bike around the tip of Manhattan from the East Village and end up at those twin towers. I have trekked in the himalayas, and there would almost be similar illusion as the suns rays were cut cleanly into shadow and light like annapurna. After the towers fell there was a smell in the air for 3 months of burning electrical components, plastic and flesh. Every weekend i’d bike by the mourge. It was awful. I wish they had rebuilt them, but they are always in my heart and mind. Yours in world peace Bill Buchen East Village New York City 2012