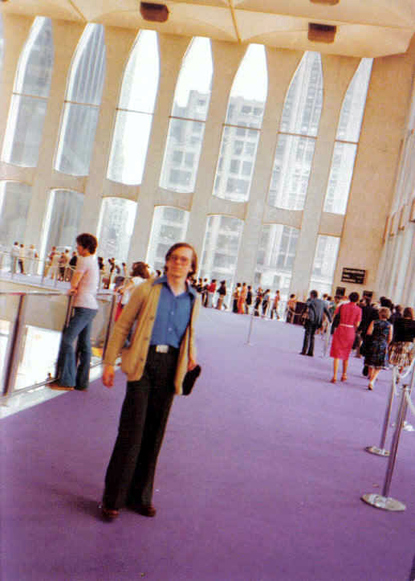 In World Trade Center’s entrance waiting for the lift to its top, New York 1978

While in New York I had to visit the World Trade Center and the Statue of Liberty so the first day we decided to visit the World Trade Center. We walked there as it was near our hotel and we entered the main entrance on the ground floor where the lifts to the top were. All I can say is that we queued in order to enter the lift, as there was a long queue before us. Nothing to worry about and we waited for the lift to take us up to the top. The lift’s speed was fascinating, and soon we were almost at the top of one of the World Trade Center’s two buildings, which were in that period the tallest buildings in the world.

We had the chance to have a panoramic view up there on every side of it and enjoy the visiting area with different shops and we also had the chance to climb the stairs to the open-air top of the building with another panoramic view. By all means no one could go near the edge of the building due to safety reasons as there was a fence around 5 meters inside the edge. We used the same way down to its ground floor, I mean by the lift and we went around the city that never sleeps for the rest of the day.

More information about Emmanouil Lalaios can be found on his main website concerning his rechearch since 1997. He is researching about the great traveler Percival Harrison Fawcett (18 August 1867 – in or after 1925) was a British artillery officer, archaeologist and South American explorer.