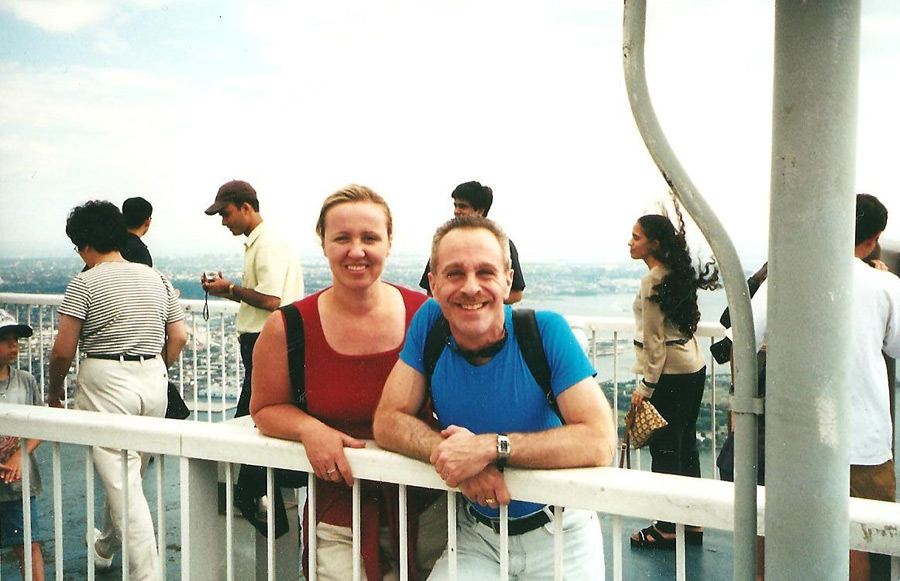 Sunday night (April 18, 2010), I decided to take down a box of loose old photographs that were on the top shelf of my closet and try to organize them in some way.   So, here I sat on my apartment floor with years and years worth of memories lying all around me; having flashbacks. I found several photos that I had completely forgotten about when I first moved back to Philadelphia in 2001, and had met up with my ex-boss from Florida in New York City for the day.

She was there visiting with some family members, but wanted to do some sightseeing with me because she knew I had once lived there.   What I’m about to share with you is strange, but very real. I should start by telling you that I’m extremely sensitive to energy. I have always been able to sense energy on a very deep level, therefore if something is happening or is about to happen, while many people may not necessarily sense it, I do.

I had moved to NYC in 1974, a year after the World Trade Center had opened, but because I’m not too terribly fond of heights, had never visited the towers during the five years I lived there. So, I was a little apprehensive when my ex-boss suddenly suggested we all go to the top for a glorious view of Manhattan.   Amazingly enough, once I got up there I was not as frightened as I thought I would be. In fact, when we got outside the observation deck we both started laughing, because my ex-boss was the one who began freaking out about the height, and yet, I on the other hand felt surprisingly okay.   Between seeing the various exhibitions and walking outside on the roof, we were there for about 45 minutes.

Now, here’s the strange part….  As we were waiting to get on an elevator to come back down, I suddenly felt myself begin to panic. I had no rational idea why I was feeling this way, but I could sense some sort of horrendous pandemonium going on around me, when in fact, everything around me at that moment was calm and peaceful.  It felt as if I was experiencing two different things happening simultaneously.  I could feel that everything was perfectly fine around me, but could also feel something outside of what was happening, happening.  When I closed my eyes, I could hear and see the shadows of people in chaotic alarm. It was like watching a movie on a planitarium screen that surrounded me.

I turned to my ex-boss and said, “Can I ask you something? Do you feel this building vibrating and shaking? ”  She said, “No.”  I said, “Well, I do.”   Now I realize the World Trade Center was built to sway with the wind for flexibility, but this was not just a swaying I was feeling, it was a definite vibration and shaking.   I started to sweat profusely and felt like I was going to faint.   She looked at me and said, “Are you alright, Ron? You’re as white as a ghost.”   Because her two young nephew’s were standing close by us, I didn‘t want to frighten them by making a big deal about how I was feeling, so I quietly said to her smiling, “Just get me the hell out of here, because I feel like I’m going to flip out.”

As soon as the elevator doors opened I ran in and started to quietly mumble, “Ok, everyone…hurry, hurry, hurry.” When the elevator reached the lobby floor, I felt my entire body sigh with relief.   And I can remember this now as if it occurred yesterday. As we walked through the exit doors, I turned around and looked straight up at the towers.   And had the most unsettling feeling.   This experienced happened to me in late July of 2001.   Less than two months later, 9/11 happened.  It was not until almost a year after, did I even recall having this experience.   And wondered…