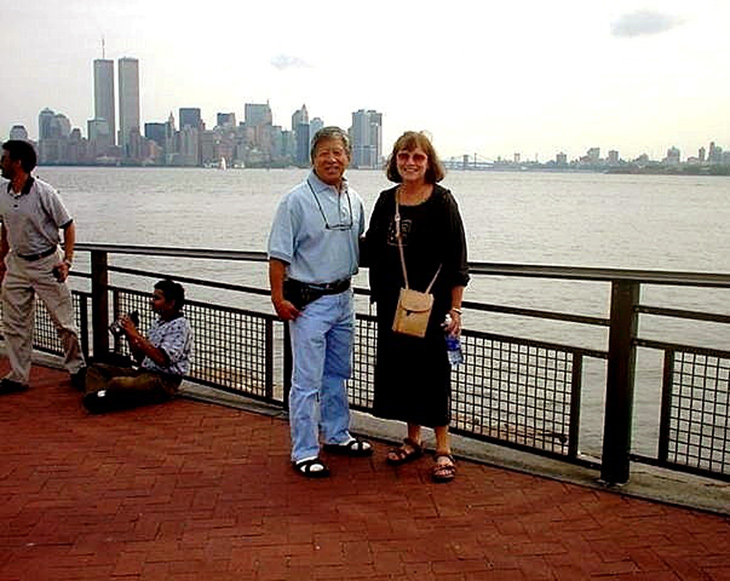 „We were in NY one week before 9-11 and in Boston on 9-11-2001 on our way Northward for leaf peeping and planned to tour the Twin Towers on our return trip. I am sure everyone has their intimate moments relating to the events of that day, we have ours.

I wrote our recollection and impressions of our return to „Ground Zero“ three years later:

Our day in New York City

On October 8, 2004, three years after 9/11, we boarded the commuter train in New Haven, CT. for our 1 hr, 45 minute ride into the city. Nothing out of the ordinary happened, actually it’s a good time to organize your day, catch up on your reading.

Today, our plan was simple, we’re headed for “Ground Zero” and prepared to accept whatever’s there after that fateful day, September 11, 2001.

There’s a story in the recesses of our memories that is quite different than what we are about to see. You see, we were in New York City the weekend before the terrorist attacked the towers on 9/11/2001.

On September 4, 2001, one of our stops was at the Statue of Liberty which is always a photo opportunity, we asked a third party to take our picture. We lined up and posed with the Trade Towers in the background… what a significant picture that turned out to be. We could not have imagined those twin towers would be reduced to rubble and change our lives forever.

Even with the passage of time, the memories of 9/11 are still there. The television images are still vivid. The unthinkable became reality. The realization of losing one of our basic freedoms materialized; it’s the freedom of feeling safe.

Sadly, there can be no illusions with which we lived prior to 9/11. We strive to live a normal life cautiously unafraid to travel wherever we choose, however, we exercise common sense and listen to that voice that speaks to us at the apropos times…….Our first impulse is not to be distrustful, but we know there are people that want to hurt innocent people to further their theological cause….  It shouldn’t be that way, but it is….

Back to our day in New York City 2004, as we emerged from Grand Central Station we were lined up with Park Avenue, our route to “Ground Zero”.

We arrive at the civic center and the city hall which housed the office of then Mayor Rudolph Giuliani. We see our favorite pizza place, Lisa’s Pizza, on 76 Fulton Street. The proximity of the complex was only blocks from the Trade Center.

The city has successfully transformed “Ground Zero” into a site of honor and remembrance. There are informative posters and displays providing background, history and chronological events of 9/11.

Visitors pose in front of the 16 acre pit and take pictures as a record of their rendezvous with history. Working the crowds are the souvenir hawkers and self appointed tour guides spewing out anything that will catch attention in hopes of a few tips.  Then, the school kids on their field trip, many with their faces pressed against the metal fencing trying to understand the essence of the scene, they look to the teacher, the teacher patiently explains.

Clearly, those responsible for 9/11 cannot be of this human race….

Rising from the ashes will be the Freedom Tower which will soar 1,776 feet above the city and will honor and memorialize those who lost their lives there.

“How badly our enemies underestimated the power and endurance of freedom. In less than three years, we have more than just plans on paper. Today we take 20 tons of Adirondack granite – the bedrock of our State – and place it as the foundation, the bedrock of a new symbol of American strength and confidence. Today, we lay the cornerstone for a new symbol of this city and this country and of our resolve in the face of terror. Today we build the Freedom Tower.”

We leave lower Manhattan with optimism and when we return, the Freedom Tower will be a beautiful memorial and a shining beacon of American spirit.

Remember, „They must never be forgotten.“