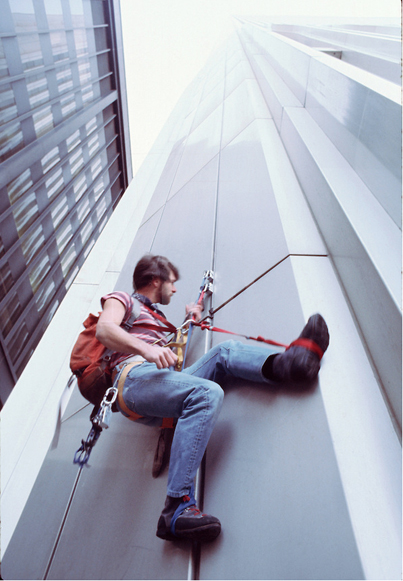 Having know about the impending climb and the planning for several months before. George, myself and a few other close friends had made prior visits to the WTC site for measurements that George needed for engineering the climbing devices. The night before the climb we had all talked on the phone and planned to meet at 8 Am or so at WTC. Although we knew it was something really cool George was doing none of us had the slightness idea of what would follow, nor did George. That’s Karma!

I was late in arriving because of subway delays. It was just before 9AM when I arrived. I saw that George had begun the climb, but none of our other friends were there. I shouted up to George, Hey! whats going on. He said Hi Mike! The police took the others away. I am going up now.

Moments later a policeman approached me, as I started taking photos, the very one you now have a copy of for your collection, and asked me if I knew this guy and who he was? Having been forewarned I said I was with the press and he left me alone.

I followed George’s assent up to approximately floor 85 from various points, some from the other tower and watched in amazement as the world tuned into the event.

Watching the police starting down in the window washers scaffold was worrisome and unbelievable as George swung himself back and forth until he was able to reach another track in order to avoid capture and complete the climb. I think that once the police understood that was all he wanted to do they backed off and let him do it.

I on the other hand got freaked out and left the WTC. I thought to myself I can’t bear to watch a best friend die like this. I mean I didn’t know if they were ready to shoot him or what. So I didn’t get the victory shot of him making it to the top.

It was only later that day in court, George had called me to let me know what had happened and what cool events were about to take place that evening, which I photographed as well. Our friends it seemed had been taken into the lower levels of the WTC for interrogation They were handcuffed and asked a bunch of question and were all released shortly after their statements were given.

The next day we drove together to 42St and Broadway where there used to be an International newsstand. You know, before the internet. George was on the cover of every newspaper from around the world. We scooped them up an laughed and took off to show friends.