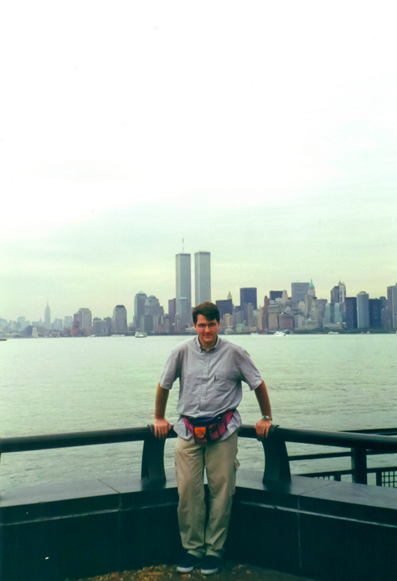 I went to NYC with my girlfriend (now wife) Silvia in July/August 2000. We shot the portrait pictures from the Statue of Liberty island and on an evening of a later day we went to the WTC site to go up the observation deck. We probably ended up in the wrong tower as a lady at the elevator entrance harshly denied us from accessing the upper floors because of my attire (no tie …). I suppose she misunderstood we wanted to go to the tower top restaurant while we just wanted to reach the observation deck but she did not take the extra effort to understand a couple of tourist. It then became a „must do“ to reach the observation deck so the next day we went back and followed the stream of tourists. The great view was the reward for the previous night incident.
After we learned of the 911 attack I was on the phone with my wife and we both realized one of the first thing we thought of regarding the WTC was that lady, hoping she was safe, supposing she was still working there a year later, as she was the only person we knew in the WTC.

We went back to the WTC site in 2005. www.bedinfamily.blogspot.com/