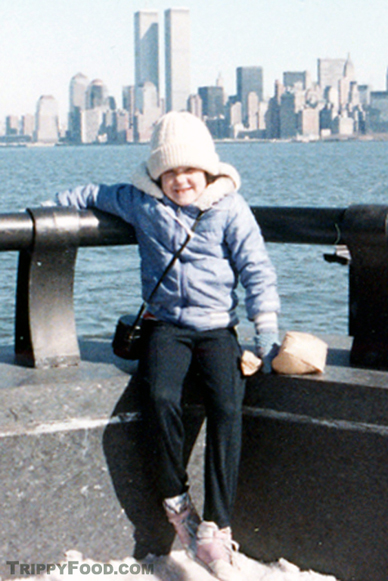 In 1968, my father drove the family from Boston to New York City; I was a knee-high sprout of 8 at the time. I don’t recall where we ate or stayed on that trip, but I will always remember three events: visiting the top of the then-tallest building in the world, the Empire State Building, climbing to the top of the endless spiral stairs of Lady Liberty to gaze out from the crown in the 103° heat, and hearing my father speaking Spanish to a man in Battery Park who was trying to communicate with us in what seemed like gibberish at the time. I was instantly hooked on the sense of adventure and absorbing the sights, smells, sounds and tastes of what seemed like another world. When my daughter Juli was approximately the same age, I rewarded her on her birthday with a similar trip, only in February the outside temperature was about 100° cooler. The itinerary was almost the same, except our visit to the observation deck of the tallest building in the world was in the World Trade Center.

On April 17, 2001, I was calling on Marsh on the 95th floor of 1WTC on behalf of the company I worked for at the time. After the initial bombing in 1993, it was required to get a security pass to visit any of the office floors, which for some reason I kept. I was ushered into one of Marsh’s conference rooms which featured a wall entirely made out of glass that looked out over New York. When their representatives arrived, I remarked how it would be difficult to get any work done with such a spectacular view. Four and a half months later (while working in Montreal) I heard the news about the attack on the towers and immediately not only feared for the safety of those I met, but also was horrified by the thought that the view from that very room would have been of a jet approaching the building. As cell service was disrupted, I couldn’t discover their fate until several hours when the New York-area sales rep contacted me and let me know that the people we called on were safe; sadly, Marsh lost 295 employees that day.