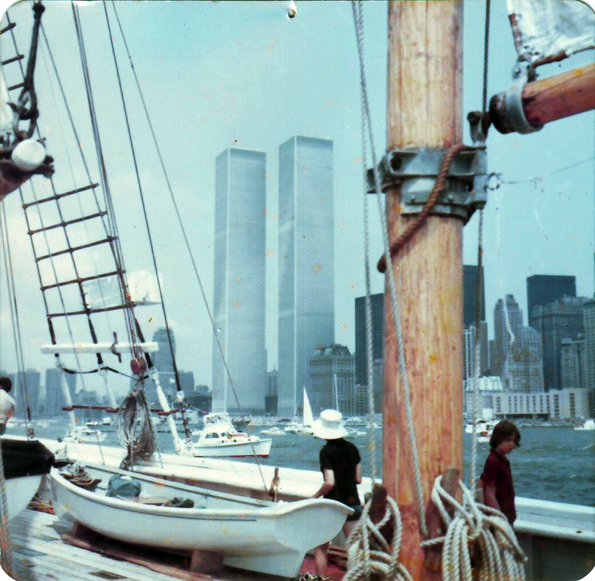 In all innocence I took that picture on the 4th of July 1976. With my schooner that you can see on the homepage, I had participated in a Tall Ships Race from England to America and the culmination of this race was to occur in New York on that fourth day of July to feast the Bicentennial of american independence. During the week or so since we had arrived in the new world I had already experienced some fine examples of yankee administrative … well let’s call it ‘bureaucracy’ although I have a more descriptive term for it. The Tall Ships Race had been organized on the demand of the american government and many of the participants, such as I, had spent big bucks to sail across the Atlantic for the pleasure of the Americans. I had arrived the day before in New York and was told by the ‘Authorities’ to anchor in a lousy windy spot while there were plenty of nice places to go alongside. Another obese and bloated customs fellow made me sign a form that made it a criminal offence for my ship and captain to earn any money in american waters. “Confiscation guaranteed,” the fat slob said with a smirk. I soon learned that old world administration was not so bad after all.

However, I was not far from being broke and I had made plans to embark about 150 Americans at $100 a piece and at 5 o’clock in the morning I tied up to a small jetty east of Battery Park to get my paying passengers onboard. What a crowd! they should have paid 500 bucks, a trail of gum, cig ends and coke bottles on my pitch pine decks that took us a long time to clean. But, they were soon to be punished by their own quirky weather.

All the tall ships captains had been instructed by the harbour captain to form a parade that was to sail up the Hudson river from the Verrazano Bridge, Staten Island to the George Washington Bridge, Bronx. There we were to turn around, go back south to our moorings. “How are we going to do that without collisions,” I asked. The big shot harbour master admitted that he didn’t know. Promising!

By about 11 o’clock we were all more or less in line and we started steaming north and as there was no wind we all hoisted some sail to make it look better. My ‘Artemis’ was just behind ‘Amerigo Vespucci’, a clumsy italian full-rigger of about 4000 tons and I wondered about the turn around manoeuvre in the narrow river at Washington bridge.

Then, a weather phenomenon occurred the like I have never seen before or since. A black spot that within minutes grew to a snarling black cloud rose up in the north and ten minutes later we were in the midst of a blizzard with not even a ship length of visibility. As soon as I had spotted that bloody black cloud, my crew had taken down the sails but there was no way we could see the other ships, radar could not penetrate that shitload of snow and ice. My young french friend, Hervé was at the wheel, bare foot, in shorts, no shirt and I saw him going blue. “Leave me, Nick,” he said through shattering teeth, “I think I know where the other ships are. Just get me a blanket.” We soon wrapped up our precious Hervé without disturbing his fanatical concentration. For a quarter hour that blizzard blew at about 40 knots and then, phew! it was gone. Amazingly, the relative positions of all the ships had hardly changed, no one had made a cock up. We even managed to get back to our moorings without collisions but my american passengers were in a sad state. Their fright of imminent shipwreck and the cold had made them forget to eat, drink, spit gum or shit and piss but I was still happier to see the last of them as they were to get back shoreside.

We moored at Manhattan west side, almost underneath the silly looking square pillars of the World Trade Centre that were to become such a tragic symbol… yes, of what? I’m still ruminating.

Rarely have I encountered more inefficient port officials and on top of that I badly damaged my ship by hitting a great steel spike under water that stuck out from one of their disintegrating harbour pilings. Westside Manhattan harbour basins were already a ruin thirty-five years before those towers came down.

That symbol I talked about. Lots of people talk about global warming but what happened to those arrogant Towers symbolized Global Insanity, which probably will cause humanity a hell of a lot more misery before that warming will have any effect.