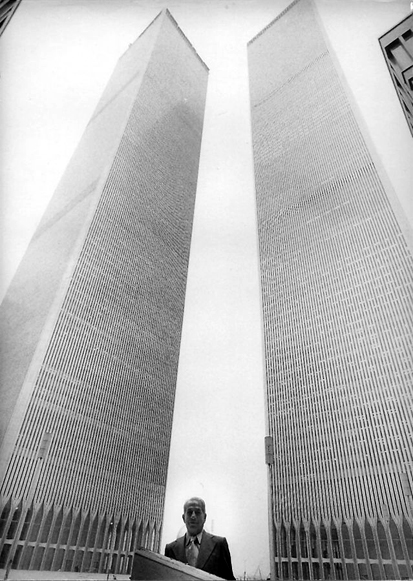 My father was Anthony Salvadore. He was president of Star Circle Industries. His company pioneered a very high-end wall system that was composed of self-contained units that could be reconfigured. Very popular in skyscraper construction because new tenants could reconfigure their suites without having to bring in huge construction outfits and the hassle of demolition etc.
By the time the World Trade Center was contracting, my father’s company had a very strong presence in tower construction in New York. Landing the World Trade Center contract was a very proud moment for him.

The towers were completed in 1973. My father passed away in 1978, the same year I moved from upstate NY to Manhattan. From the front door of my apartment building, located on lower Fifth Avenue, I would look to my left and see the twin towers several blocks to the south. To the right stands the Empire State Building. My Father was involved in constructing the antenna that tops off that tower. For many years, I had these two iconic buildings standing guard; a constant reminder of my father’s legacy.

On September 11, 2001 I stood at the window of my office on the lower west side and watched. Briefly that day, there was concern that the Empire State Building was also a target, but thankfully that didn’t happen and when I leave my building it remains just to the north. But to the south there’s a void in the sky- a constant reminder. I watched the towers go up and I watched the towers come down, so I have a bit of history with them.

In the image he is holding a piece of the marble that was used in the lobby.