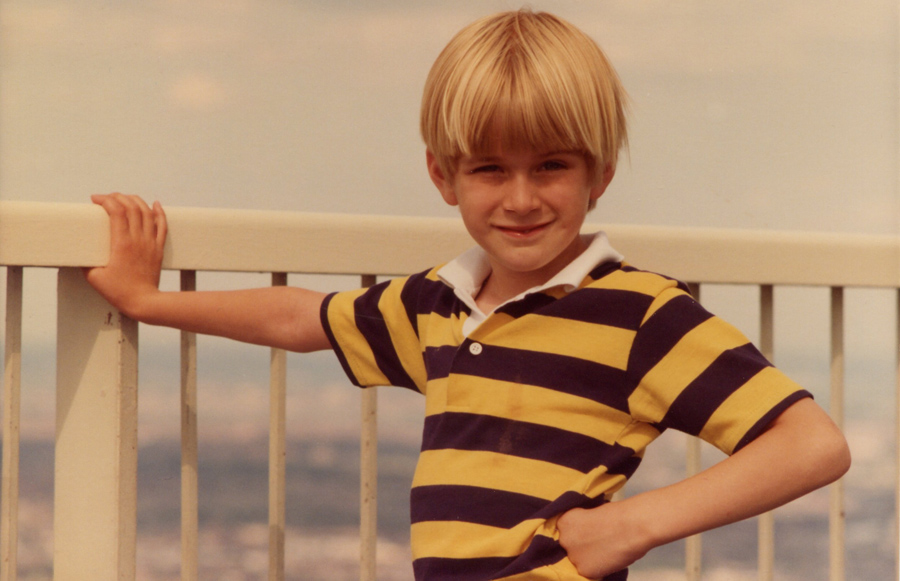 These photos (#542 & #543, editor’s note) were taken by my father in 1976, on my second visit to New York City. I was six years old. The photo of me leaning against the railing of the observation deck strikes a jaunty, confident note that was appropriate to the towers themselves. The World Trade Center was nothing if not a gesture of supreme, guileless confidence. I was not a very confident child, but I did like height and I loved New York. The photo of me playing on Frtiz Koenig’s „The Sphere“ is a recent re-discovery. How many other children saw those smooth slopes and concluded, with the logic of children, that they must be slides? Thousands, probably.

I moved to New York City after graduating from college, and spent a few days working in one of the towers as an office „temp“ (temporary worker). I can’t remember which tower the office was in, or even the name of the company I did such indifferent work for. I do remember the unearthly sound made by air within the elevator shaft, and the perceptible sway of the building in the wind.

A few years later, on a flight from Providence to Washington D.C.,  I looked out and down from my window and saw something peculiar: two squares above cloud height. With a start I realized that I was looking at the tops of the Twin Towers, clouds eddying around them like tidal waters around buoys. That was my last glimpse of them. Two people I was acquainted with died in the plane that was flown into Tower 1.

There must, in some culture, in some language, be a name for the feeling that sets in when a place one has been in is destroyed. I’d like to know that name. I’ve been back to the WTC site twice. First, I went back to cast two small stones into the pit, stones taken from a place my two acquaintances knew well. Adjacent buildings were still draped in plastic mesh and scarring from falling debris was visible on their granite facades. On my second and last visit, my overriding impression was that the air above the pit was a tomb. I didn’t stay for long. I won’t go back.