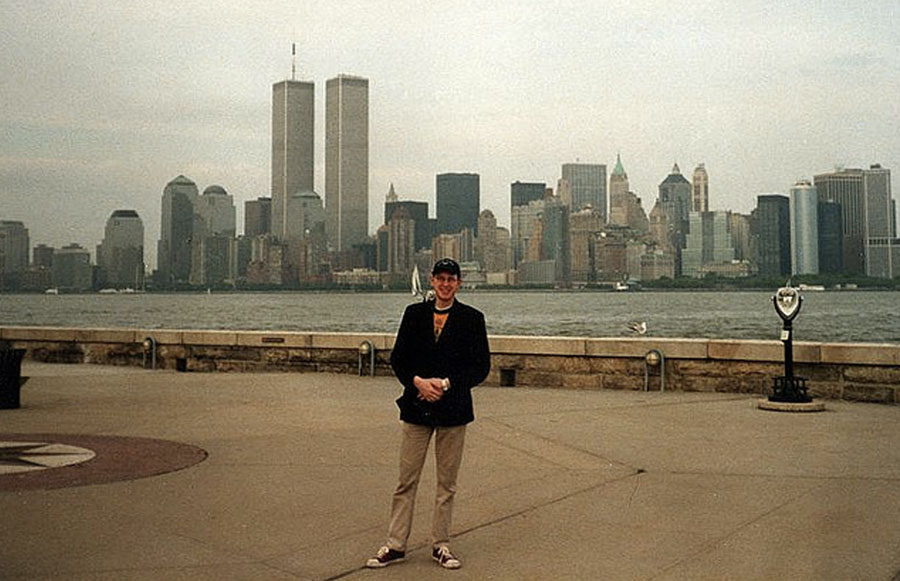 I can tell you a little bit about the photo. Firstly, I am from Somerset in England. I travelled to New York City in May 2001 for a holiday. This image was taken from Liberty Island with me in front of the iconic Manhattan skyline which of course then included the WTC. The day before this image was taken I visited the top of the WTC and was in awe at the fantastic view afforded from such a height. It was the hiughlight of my visit. I can see that I am wearing the football shirt of my favourite team, Bristol City.

For me, in 2001, the New York City skyline was completely dominated by the WTC. It was simply amazing and was the first thing I saw when I flew into NYC and landed at JFK. Prior to my visit I was unaware of the buildings existence but was taken aback by its sheer size and height. I remember photographing the shadow of the towers stretching over Brooklyn from the top of the tower and then watching the sun set over New Jersey. It was only a few months later that the terrorists attacks brought them down, and this caused me a great deal of depression from which I have only recently recovered.

As well as this photo I recall taking a picture of myself next to the towers at night when they were lit. Sadly my photographic skills were rather less professional than they are now and while I am lit by flash, the exposure failed to register any of the building.